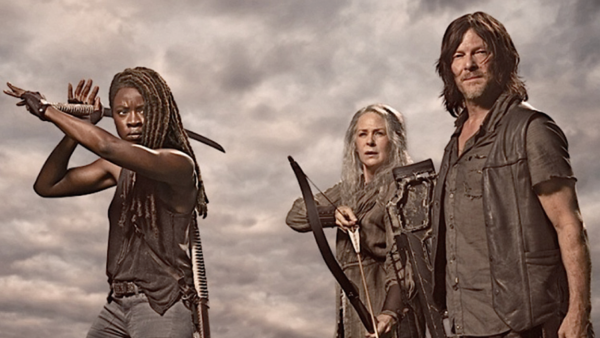 This blog post contains content some people may find disturbing, it also contains spoilers. You have been advised.

I’d like to say I’m feeling better but I’m still reeling from last weeks emotions. However I was requested to do another review for this weeks episode. I’m looking at you Miss Scott!.

Forewarnings, expect badly written & jumpy sections.. I can’t use my emotions as an excuse this time, I’m just bad at writing reviews.

This weeks episode shows a realllly large jump through time (despite there being one not long ago). We’re looking about 4 or 5 years ahead. Judith is no longer a sweet little button, Rosita is bumping uglys with the preacher & Eugene has a plait.. so let’s just jump straight in.

My first thoughts of this episode were based on Judith, I won’t lie, she’s annoying… she’s probably worst than Carl during his annoying younger years. But I did grow to love him massively. I know she just wants good for people but excuse me love, you don’t just decide “if they don’t go, I don’t go”. I’d of waved her stubborn little arse buhbye and left her in the woods to fend for herself! A group of fully grown human beings could not talk a child out of moving 😂 oh boy. I also had a few gripes with her talking to Negan, I dunno, she rubbed off on me weird.

Carol, Carol, Carol, CAROL. Literally could this woman be any more fecking bad ass than she already was? Happily hunts down the fools who rob her and burn them alive. Amazing, but the best part? She walked away. *queue cool guys walking away from explosions playing in the background*. Yuuuuus Carol. Fully loving her little family she has building, so happy for her. She is one of the characters who deserves nothing but greatness. Also loving the fact she found our Daryl roaming the wilderness and picked him up.

Michonne & the child. Are we all just going to sit here and pretend we didn’t just see her scooping up a child with ZERO mention until that moment? Well I was positive she was going to end up having a child with Rick. She wanted it, he agreed and along comes RJ (I’m assuming Rick Junior). Her tough girl attitude shone through up till the end when she accepted Magna & the troop into hilltop instead.

I’m enjoying the “community vote” system, it’s lovely to see everyone banding together in a committee to make decisions instead of one person pissing it up. It’s handled so well in this episode, a very good mix of characters used as well!

Magna and her tribe. I don’t have a lot to say as of yet. It’s exciting to meet new people and I’m hoping they grow on me some more!

The whisperers. Now I’m not up to date with the comics, in fact I’m only on the 3rd one. So when I got to the end of this episode and heard a zombie say

Don’t let them get away

I was pretty mortified at the thought of AMC developing some kind of intelligence for the Zombies. (Don’t start me on the virus rant!). So I quickly spoke to some friends who put me on the right track! The whisperers are a group who use the skin of walkers to blend in the herds & to catch their enemies off guard. Clever. They seem like a pretty primitive tribe & are run by a villain known as Alpha. I’ve also discovered Ryan Hurst will be playing the second in command, Beta. (Yay!). A final introduction to this group would be very interesting & I guess we will have to wait and see how the future episodes pan out!

Negan. Why is my man looking like a boiled egg? Free Negan, get him muscly again & give him his hair back.

Thanks for caring about my uninteresting opinion.

One thought on “TWD review: who are we now? Spoilers!”